Search
From the Blog

Welcome to Brooklyn Cooperative’s blog!  We decided to start a blog as a way to introduce ourselves. Credit unions aren’t as familiar to most people as banks, though our services are likely better suited to their needs. Hopefully, through this blog, we will show that.

In the fall of 2016, after years of organizing and planning, a food cooperative opened in Greensboro North Carolina to serve a neighborhood that had been without a grocery store for 20 years. In January 2019 it closed.  I listened to a stunning webinar organized by Nonprofit Quarterly which brought together three of the key people responsible for setting up and running this coop.  It is well worth a listen.

Quite a few things resonated with me in the context of Brooklyn Coop. In this slide, for example, the organizers described how hard it was to find skilled general managers (GMs) for grocery stores who also could understand with the challenges of their particular community. The organizers absolutely needed the food coop to be financial sustainable, which required some fairly technical knowledge of how a grocery store needs to work. But the grocery store needs to work in *this* community, so a GM has to be able to understand that context.

Watch the webinar at 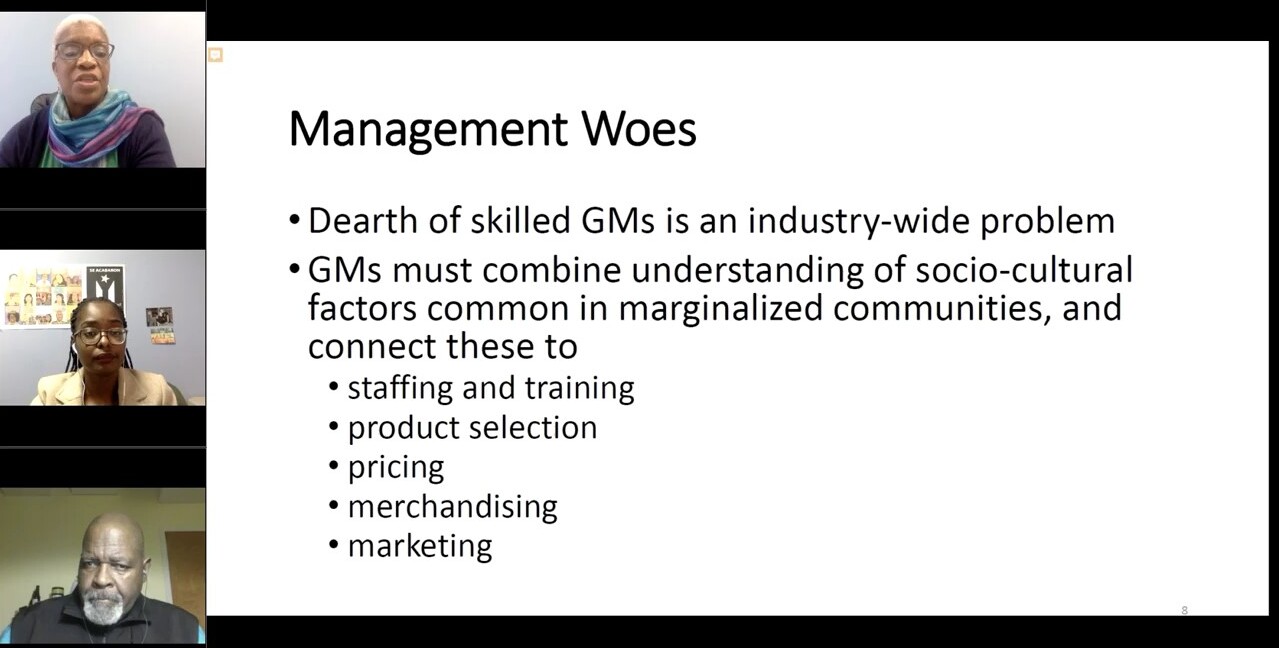 Same for a credit union!!!  It is no accident that BCoop’s current Strategic Plan is focused entirely on capacity building. Without that, without building up the necessary technical skills in the community, then no community-based project will succeed.

At another point one of the organizers talks about the lessons they learned in the form of ”2Cs and 3 Ms”. The 2 Cs are corporate competition and capacity. The organizers underestimated how thin the profit margins are in the grocery business, and the giant advantage that large chains have over the individual store operations.  (Same for Brooklyn Coop!!!)

The 3 Ms are marketing, management, movement.  Marketing meant that the organizers learned too late that signage and buildout of the storefront had tremendous impact as to whether people would come in to shop. Management was the need for skilled managers as described above. Movement meant that the organizers felt a great deal was lost when the food coop went from monthly meetings to quarterly meetings. The closeness of the membership was key to people’s satisfaction. It was a competitive advantage over the dollar stores where people were used to getting groceries, so without that feeling, people ended up choosing the cheaper, dollar store option.  Yet there was nuance in this conversation: individuals want to be part of a grander vision, but they also need the services, and dollar stores are so ubiquitous that, on most days, people who are stretched for time and money will still head for the closest and cheapest option.

Samira Rajan is the longest-serving employee of Brooklyn Coop and currently the Director of both the credit union and Grow Brooklyn. She started here as an Americorp*VISTA for a single year of service back when we were Bushwick Coop in 2001, got hooked by the challenge of building a community financial institution, and hasn’t left.

Brooklyn Cooperative’s routing number for ACH / EFT transactions*: 026084262 Note that this is not valid for wire transfers. For wire instructions, please contact us at 718-418-8232 x0 or info[at]brooklyn.coop. Members may also make a domestic wire transfer request by logging onto their online banking account and completing the wire transfer request form.